Why was Anne Boleyn Executed? Anne Boleyn, Queen Consort of England, was executed by a French swordsman at the Tower of London on 19th May 1536, just sixteen months after becoming Henry VIII’s second wife.

So, how did this 35 year-old, spirited young woman fall so dramatically from favour? She had after all caught Henry’s eye in the mid 1520s and moved successfully from mistress (although not in the full sense of the word) to queen. Henry VIII had been so besotted with her that he had waited for seven years for her and bombarded her with letters when she was removed from court, seventeen of which remain today, and yet this was a man who hated writing his own letters. He broke with Rome to have her, he fell out with men who had been his best friends and advisers, he had moved heaven and earth to possess Anne – how can such love and passion turn into a dark hatred which resulted in Henry ordering Anne to be executed?

Why was Anne Executed?

If you google “Why was Anne Boleyn executed?” or ask people, you’ll get all kinds of answers:-

But what’s the truth?

One argument put forward by Joanna Denny in Anne Boleyn: A New Life of England’s Tragic Queen is that Thomas Cromwell, Henry VIII’s Secretary of State, needed Anne out of the picture. 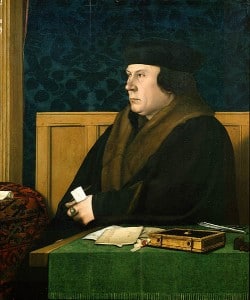 Cromwell had previously supported Anne Boleyn, sharing her Reformist views, but had argued with Anne over the dissolution of the monasteries. Anne was all for reforming the monasteries but only where needed. Moreover, she believed that the money should be used for educational and charitable causes. Some historians also believe that Cromwell felt and felt threatened by Anne’s growing power and influence over the King. Anne seemed to be wrecking all of Cromwell’s plans and policies, including an alliance with the Holy Roman Emperor, and he had shared with Chapuys in 1535 that Anne had told him “that she would like to see his head off his shoulders.” Was it a case of her or him? Cromwell had witnessed Cardinal Wolsey’s dramatic fall.

Cromwell took credit for the plot against Anne in 1536. Eustace Chapuys, the imperial ambassador, recorded that Cromwell had told him that “it was he who, in consequence of the disappointment and anger he had felt on hearing the King’s answer to me on the third day of Easter, had planned and brought about the whole affair.”

But, where was Henry in all of this?

It is hard to know the truth of the matter. Historians like Eric Ives believe that Cromwell was able to take advantage of Henry VIII’s growing paranoia and doubts about his marriage to Anne and that he manipulated Henry VIII into believing that Anne was guilty. However, I have to agree with Derek Wilson and Cromwell’s biographer, John Schofield, who see Henry VIII as the prime mover in the events of 1536. Wilson writes of the illegal and “extremely cumbersome” means used in Anne’s fall, which included extending the treason law in a rather “unwarranted” manner. Wilson concludes that Cromwell would only have gone ahead with such a complicated plot because it was the King’s will. Schofield agrees, painting Cromwell as Henry’s loyal servant who had a duty to obey his King and to do his wishes. I don’t believe that Cromwell would have dared to move against the Queen unless he had the King’s blessing or the King’s orders to do so. Cromwell told Chapuys that “He, himself had been authorised and commissioned by the King to prosecute and bring to an end the mistress’s trial, to do which he had taken considerable trouble”, so he’d done it at the King’s bidding.

To read more about the reasons why I feel that Henry VIII was the prime mover in Anne Boleyn’s fall click here.

To cut a very long story short, after Cromwell failed to prove that Anne and Henry’s marriage was invalid because of a former pre-contract with Henry Percy, which Percy denied, Cromwell arrested court musician Mark Smeaton on 30 April 1536. What happened to Smeaton is not known. The Spanish Chronicle states that he was tortured but there is no real evidence to back this up. He may, however, have been put under immense psychological pressure or offered a deal. Whatever happened, within 24 hours he had confessed to making love to the Queen, Anne Boleyn, three times. See Mark Smeaton with the marmalade in the cupboard for more on this.

Over the next few days, four other men – Henry’s friend and Groom of the Stool Sir Henry Norris; George Boleyn, Lord Rochford, Anne’s brother; William Brereton; and Sir Francis Weston – were arrested and taken to the Tower of London. Anne Boleyn, herself, was called before a royal commission consisting of the Duke of Norfolk (her uncle), Sir William Fitzwilliam and Sir William Paulet. There, she was informed that she was being accused of committing adultery with three different men, Mark Smeaton, Henry Norris and a third, and that Smeaton and Norris had already confessed. Anne remonstrated with her accusers but her words had no effect and the royal commission ordered her arrest. Anne was then taken to her apartment until the tide of the Thames turned and then, at two o’clock in the afternoon, she was escorted by barge to the Tower of London – see From Tennis to Tower – Anne Boleyn is Arrested.

On 12 May 1536, Norris, Brereton, Smeaton and Weston were brough before a special commission of oyer and terminer at Westminster Hall and arraigned for high treason. Smeaton pleaded “guilty”, while the others pleaded “not guilty”. All four men were found guilty on all charges – which included committing adultery with the Queen and plotting to kill the King – and sentenced to be hanged, drawn and quartered. Their sentences were later commuted to beheading.

On 17 May 1536, George Boleyn and Anne Boleyn were tried in separate trials in the King’s Hall at the Tower of London. They were tried by a jury of their peers, a jury which can only be described as a hostile jury, and although they both put up a spirited defence they were both found guilty of treason and sentenced to death. George, Norris, Brereton, Smeaton and Weston were beheaded on Tower Hill on 17 May 1536 and Anne Boleyn was beheaded within the Tower of London confines on 19 May 1536.

While the investigations, trials and executions were taking place, Henry VIII was cavorting with ladies and spending time wooing Jane Seymour. The couple got betrothed on 20 May, the day after Anne’s execution.

Yes, I believe so. You can read more about this in my article Anne Boleyn: A Cheat who deserved Death? I don’t think so, but here are a just a few points:

Like many historians, I am convinced that Anne Boleyn and the five men were innocent victims of a plot devised to free Henry VIII so that he could marry again and have the chance of a son and heir.