On 19th May 1536, Queen Anne Boleyn was executed for high treason at the Tower of London. As was customary, Anne addressed the crowd and she kept to the usual execution speech format: An acknowledgement of the spectators’ presence. An acknowledgement that she had been condemned to death by the law. A confession of her […]

Today is the anniversary of the execution of Queen Anne Boleyn, Henry VIII’s second wife, on 19th May 1536. Anne was beheaded within the Tower of London confines by a swordsman ordered from Calais. There were just seventeen days between her arrest and execution. In this video, I explain exactly what happened on this day […] The Fall of Anne Boleyn: The end It’s the 19th May and we’ve come to the day Queen Anne Boleyn’s life ended at the hands of the Swordsman of Calais, but really at the hands of her husband, King Henry VIII. ‘Anne of the Thousand Days’ was executed by beheading on a newly built scaffold within the confines of the Tower of […] 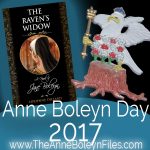 As part of our commemoration of the anniversary of Queen Anne Boleyn’s execution on this day in 1536, historical novelist Adrienne Dillard has kindly shared this extract from her best-selling novel The Raven’s Widow: A Novel of Jane Boleyn. Thank you so much to Adrienne for taking the time to read this to us, she’s […]