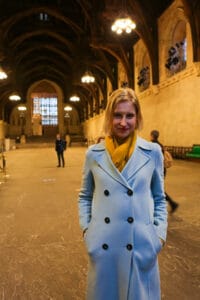 Great news! A new three-part series on Anne Boleyn presented by historian Tracy Borman will air on Channel 5 on 24th, 25th and 26th November. It’s called the Fall of Anne Boleyn and the three episodes cover her arrest, trial and execution in 1536.

Tracy will be retracing Anne’s steps, hour by hour, in those final days, and putting forward evidence to “show how the architect of her downfall, Thomas Cromwell, uses any means necessary, including torture, to bring charges of adultery, incest and treason against the Queen.”

This is definitely something to look forward to in these strange times! When we can’t get out to visit places, it’ll be lovely to see historical attractions like Greenwich, the Tower of London, and the National Archives, albeit virtually!

For those of you outside the UK, I’m not sure about plans for it to air internationally.

Cheeky plug now! A certain Claire Ridgway has written a book on Anne Boleyn’s fall in 1536 called The Fall of Anne Boleyn: A Countdown (available on kindle, as a paperback and as an audio book), so if you want to delve even deeper into the events of 1536, you can! Find out more at Amazon.com or Amazon.co.uk.