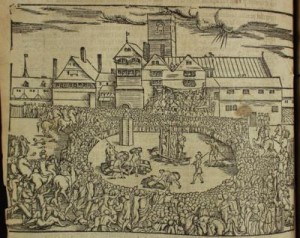 On this day in history, 18th June 1546, a young woman in her twenties from Lincolnshire was found guilty of heresy and sentenced to burning at the stake.

Antonia Fraser writes of how she had already been cross-examined for heresy the year before and “had responded to her accusers with vigour”1 and survived to fight another day but her days were numbered. Both Stephen Gardiner and Thomas Wriothesley were on a mission to rid the land of heretics, particularly those connected to the court and Anne Askew had connections. Anne’s brother was a member of the King’s household, her sister was married to the steward of the late Duke of Suffolk and it was suspected that she was receiving money from influential court ladies who were connected to Queen Catherine Parr and men like Edward Seymour, the Earl of Hertford, who were suspected of holding “Reformed” views.

Wriothesley saw Anne as a way to bring down these women and so Anne was interrogated and eventually racked by Wriothesley and Richard Rich, who operated the rack themselves when the Lieutenant of the Tower, Sir Anthony Kingston, refused to continue racking the woman after the first turn because such torture was illegal for a woman of her standing. While Kingston dashed off to report the goings-on to the King, Wriothesley and Rich continued racking Anne to try and get her to give them names, and possibly to implicate the Queen. Even though they racked “till her bones and joints were almost plucked asunder”, Anne would only admit to receiving money from the servants of Anne Seymour, Lady Hertford, and Jane, Lady Denny and would not implicate their husbands or the Queen.

On the 16th July 1546, Anne Askew was burned at the stake at Smithfield with three other Protestants. She had been injured so badly on the rack that she had to be carried to the stake and her body had to be supported on the stake by a seat.

“As the faggots were piled high about them, Wriothesly made his way through the throng to offer the four a pardon if they recanted. Anne spoke for them all, crying aloud that she “came not hither to deny my Lord and Master!” The torch was lit and the four died quickly thanks to gunpowder a friend had thrown into the flames. A fortuitous thunderstorm, breaking out suddenly, added to the legend that grew to surround the death of the Fair Gospeler: the thunder, the 18th century ecclesiastical historian John Strype tells us “seemed to the people to be the voice of God, or the voice of an angel”.”2

This courageous young woman lost her life in the flames that day, dying for her faith.

You can read about Anne Askew’s life in my article from last year “Anne Askew Sentenced to Death”.