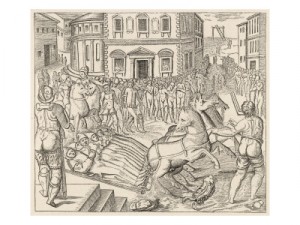 On this day in history, 19th June 1535, Sebastian Newdigate, William Exmew and Humphrey Middlemore, monks of the Carthusian Order of London Charterhouse, were hanged, drawn and quartered at Tyburn. Their crime: refusing to accept King Henry VIII as the Supreme Head of the Church.

In Letters and Papers, there is a report regarding “The Charter House Moncks”:-

“In 1535 eighteen of the Charterhouse were condemned for defending the liberty of the Church. Seven of them, viz., John Houghton, Robt. Lawrence, Austen Webster, Humfrey Middellmore, Wm. Exmeu, Sebastian Newdegate, and Wm. Horne, were drawn on hurdles through the city of London to the open place of execution, and there hanged, quartered, &c. Three of them, Humfrey, William, and Sebastian, had stood in prison upright, chained from their necks to their arms, and their legs fettered with locks and chains for 13 days. Their quarters were hanged on the gates and walls of the city and on the gate of the Charterhouse. Two of the eighteen, John Rochester and James Walwercke, remained hanging. The other nine died in prison with stink and miserably smothered, “the which were these that follow.”…”

The London Charterhouse’s Cathusian Order was an order known for its sanctity so their support for the King’s supremacy would have been a real coup for Henry VIII and Thomas Cromwell, but, after praying about the matter for three days, the Order’s Prior, John Houghton, stated that he could not take the King to be Supreme Head of the Church. This was a huge blow for the King and their resistance had to be punished as an example to other order.

18 Cathusian monks in all were killed between May 1535 and August 1540. Some were hanged, drawn and quartered, some were hanged in chains and others were starved to death. All 18 have been recognised by the Catholic Church as martyrs.

One of the men executed today in 1535, Sebastian Newdigate, was a close friend of the King and a former Privy Councillor. Newdigate went as far as signing the Oath of Succession, in June 1534, but would not accept his friend’s supremacy. He was arrested on the 25th May 1535 and taken to Marshalsea Prison, where he spent two weeks chained in an upright position to a pillar before appearing before the King’s Council and then being taken to the Tower of London. The King visited him at Marshalsea and at the Tower, trying to convince his friend to accept him as Supreme Head of the Church but Newdigate refused. He was condemned to death at his trial on the 11th June 1535 and was executed 8 days later.

These men were men of God and were known for their austerity and sanctity and executing them had to be one of the most brutal acts of Henry VIII’s reign.

Also on this day in history – The birth of James VI of Scotland (James I of England) in 1566, son of Mary Queen of Scots.